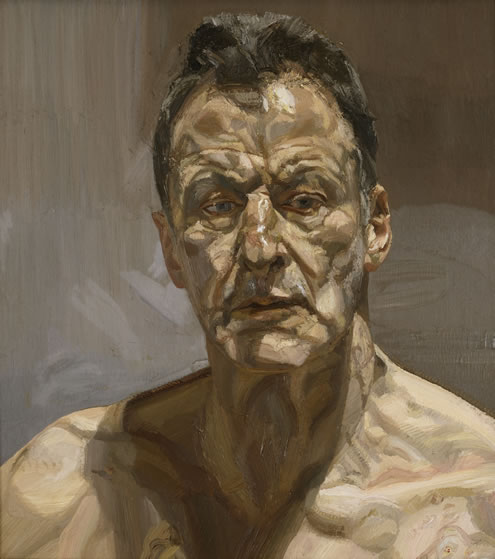 Thinking about British figurative painting evokes names such as Francis Bacon, Lucian Freud and David Hockney. These artists can be seen to follow in and further the traditions begun by the pre-war painters such as the Camden Town Group, Walter Sickert, David Bomberg, the Bloomsbury Group and the realists of the Euston Road School.

This work was in contrast to the various styles influenced by other modern art at the time, of Paris and New York, such as Surrealism, abstraction and Pop Art. Beside these parallel movements was another kind of art pioneered by a group of loosely associated artists later labelled The School of London, which was important in the reinvention of figurative art in the second half of the 20th century.

What united them was a belief in the possibility of finding new ways to create realist paintings and reinvent the representation of the human figure to make it relevant in a world traumatised by the Second World War.

When not in their studios, many of these figurative painters could be found drawing in the National Gallery, London. Their study was the art of the Renaissance and of Impressionism, regarding those pre-modern art pioneers as their teachers.

It was during the 1970s and 1980s that the work of Bacon, Freud and Hockney  gradually began to be recognised as amongst the most important British art of its time. This was an undeclared group, whose members have always varied, yet Francis Bacon, Lucian Freud, Frank Auerbach, Michael Andrews, Leon Kossoff, Euan Uglow and the more Pop Art-associated David Hockney, are regarded as the important artists, for between them they found new ways of looking intensely at the world around them: painting what they saw, with what they felt.

It is in this tradition that the New English Art Club (NEAC) was formed, although the origin of the Club was actually in the studios of a group of young London artists in 1885. This group of painters had studied and worked in Paris, and felt a dissatisfaction with the exhibition potential of the very academic British Royal Academy (RA), which was under the presidency of Sir Frederick and later Lord Leighton.

In April 1886 this group of artists mounted an alternative, rival show to that of the RA: this first exhibition of the NEAC included around fifty artists, including Frederick Brown, George Clausen, Stanhope Forbes, Walter Sickert, John Singer Sargent and Wilson Steer.

Much of the development of the NEAC should be seen in relation to the “old-school academic art” of the RA‘s “stolid… approach”, compared to the “dynamic and vibrant observation of the New English“. This is perhaps too simplistic a characterisation, however, it is remarkable that:

“the artistic descendants of the Impressionists continued to be associated with the New English whilst the RA moved by fits and starts towards a more conceptual approach and towards public gallery orientated work.”

The influence of the NEAC grew greatly during the late 19th and early 20th century, with artists such as Sickert, Augustus John, Gwen John, Tonks, Steer and William Rothenstein viewed as “a golden period indeed”. Stanley Spencer, Paul Nash, Duncan Grant and Mark Gertler were all members in the 1920s; indeed:

“almost every member of the Camden Town Group started with the New English… and it formed an essential part of their development”.

It is an understatement to observe that since the mid-1880s the world of visual art has changed enormously: up until World War II, Paris was regarded as the undisputed centre of the art world, some regard New York as the pivot point, with London at times viewed to be the predominant heart of art in Europe: certainly there has been a huge increase in the number of commercial and public galleries.

Yet the hardship of life as an artist continues as ever: indeed, it is very difficult indeed to establish a reputation as an artist and to produce and sell pictures of high quality in sufficient quantities to provide a living. To make work that is:

“vigorous and lively and life enhancing, an artist’s needs are: a tradition in which to work – or in other words – a shared artistic language, a training – an education in this language, an exhibition space and a public to buy work. All of these the New English helps to provide.”

Contemporary aims of the RA and the NEAC have diverged greatly, and today the RA could be regarded as abandoning much so called ‘figurative painting‘, which some view as leaving the field clear for the NEAC to champion figurative work. At a New English exhibition:

“at which non-members work is also shown, you will now see imaginative painting, expressionism sometimes satirical subjective paintings and abstracted work amongst the directly observed objective painting which is part of our “continuing” tradition.”

Ironically, many of NEAC artists later became members of the RA, but they still continued to exhibit with the NEAC for the rest of their careers. During the 1940s and 50s the NEAC and the RA could be viewed as most closely aligned, where some regarded the NEAC as a “staging post” or “stepping tone” to the RA.

During its early years, the Impressionist style was well represented at the NEAC, and the influence of Impressionism and Post-Impressionism continues. Nowadays, more than a century since its inception, the NEAC is regarded as a “well respected institution and one of the foremost exhibiting societies”, and today continues in a realistic, figurative style, whilst the RA has embraced abstract and conceptual art.

Today the New English seeks work which “demonstrates excellence in both concept and draughtsmanship”, and views its place and aim as a “centre of excellence for drawing and painting”. Artists such as Jason Bowyer, Melissa Scott Miller, Daphne Todd (amongst many others) are for me key artists in this area.

The visual language they speak:

“is one in which pictorial statements are slowly and intricately constructed, but when they are completed they can be understood quickly and easily by everyone.”

“It is ever evolving and capable of great spiritual depth, and this language is the Club’s main concern. The content of the pictures, the visual messages which they convey and the eloquence and strength with which they are painted is a matter for individual painters, the framework within which these artists and others like them work is the province and the future of the New English Art Club.” 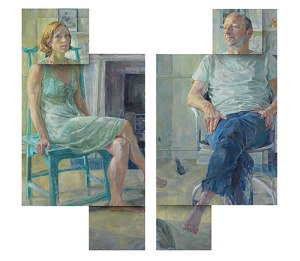 Today the New English Art Club is a group of over 80 professional painters whose work is based principally upon direct observation of nature and the human figure.  Its Annual Exhibition is a showcase for its members and gives aspiring artists an opportunity to be seen alongside some of the best figurative artists painting today.

Since the foundation of the NEAC many diverse styles of art have developed, which add richness and variety to its exhibitions. In the world of contemporary British figurative art, the NEAC,  with it current president, Richard Pikesley PNEAC: 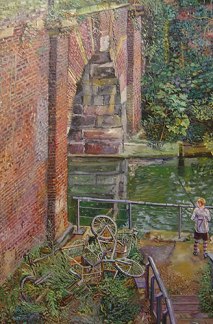 “aims to foster excellence in all its activities and continues to assist and encourage the art of painting to develop even more expressive possibilities”,

and the New English actively engages educated public interest on many different levels, including:

“a nationwide programme of exhibitions, an acclaimed School of Drawing, a website and an active Friends scheme that supports the aims of the New English.”